Since DJH and Mitten Clarke merged to become Staffordshire’s leading accountancy firm earlier this year, they have continued to live by their five core values; ambition, community, honesty, passion and teamwork. Their latest endeavour has seen them team up with the Gingerbread Centre to provide funds towards their Activity Club, which provides a safe space for children during difficult times.

The latest contribution comes after 424 Easter eggs, along with a cash donation of £1,205, was donated to the charity during their Easter egg appeal. Hayley Plimley, Head of Marketing at DJH Mitten Clarke said “It was a pleasure to work with the Gingerbread Centre so we were eager to team up with them again. After hearing that the Activity Club was severely underfunded, we knew we had to lend a hand to ensure that they could continue with this amazing project”.

The Activity Club aims to support homeless children and provide them with social skills as well as focusing on their emotional wellbeing. Whilst it is based at the centre itself, it will also include outings to local zoos, museums, libraries, and more.

Along with their donation, the team at DJH Mitten Clarke will be volunteering to help redecorate the centre’s family lounge over the coming months. Chris Belyavin, Fundraiser at the Gingerbread Centre, said “We were thrilled to hear that DJH Mitten Clarke wanted to support us once again after the incredible support they gave with the Easter egg appeal. The Activity Club is currently underfunded by over £24,000 for a three year period, so their donation will go a long way in keeping the project running.”

The fundraising efforts are supported by DJH Mitten Clarke’s ‘Great Ideas Grant’ which is a fund of money that is set aside by the business each year for team members to use in the community. It has recently helped the Alice Charities Bump & Beyond project, the Dougie Mac, Betley Amateur Theatrical Society and more.

For more information about DJH Mitten Clarke, you can visit their website at www.djhmittenclarke.co.uk 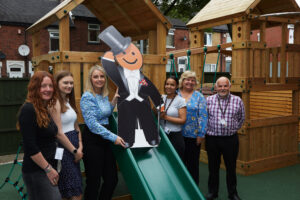